he Cévennes railway – Le Cévenol links the city of Nîmes (department of Le Gard) to Clermont Ferrand in Puy de Dôme. Opened in 1870, it took six years to build and cost a staggering 520 million francs. That’s just over one billion euros!* Whether you are an avid train buff, or simply a Francophile in search of original walking holidays in France, this train journey is guaranteed to set your mind racing and heart pumping.

Work commenced on the Cévennes Railway – Le Cévenol line in 1864 and it opened in 1870 for both goods and passengers. This was a remarkable feat based on the technological know-how of the time, involving the blood and sweat of over six thousand men – many of whom were Scots. When first opened, the voyage from Clermont-Ferrand to Nîmes took ten-and-a-quarter hours by express train (sic) and twelve hours by the regular service. The current service takes around 5 hours.

The Cévennes railway was constructed primarily for the transportation to Paris of wine from Languedoc. Languedoc was, and still is, France’s largest wine-producing region. Coal and metals from the mining district of Alès were also transported in abundance on the line. However, the production costs of Alesian coal were high. This was due to the difficulty of extracting the coal from the steep hillside seams in Cévennes, as well as its traditional transportation by horse and cart. The advent of railroads saved the day in the short-to-medium-term, but the coal was low grade and could not compete for long, particularly when power stations turned nuclear.

Ironically the birth of the Cévennes Railway – Le Cévenol, elsewhere hailed as the harbinger of prosperity, actually led to industrial decline: cheaper goods flooded in from larger factories in the North. The independent character of the people favoured small businesses, which were often located inconveniently far from the railway lines. The railway was also responsible for the gradual and progressive abandonment of cereal growing and the pre-eminence accorded to the vine. This made the region over-dependant on wine growing and vulnerable to economic cycles.

It is important to differentiate The Cévenol, an authentic and working railway line, from that of the Cévennes tourist train. The latter, the ‘train à vapeur,’ links nearby Anduze to St Jean du Gard and is known locally as the ‘train touristique.’ There is nothing ‘touristy,’ as such, about the Le Cévenol. It forms part of a longer, cross country/non-TGV or TER route linking Marseille to Paris, a distance of 863 kilometres. 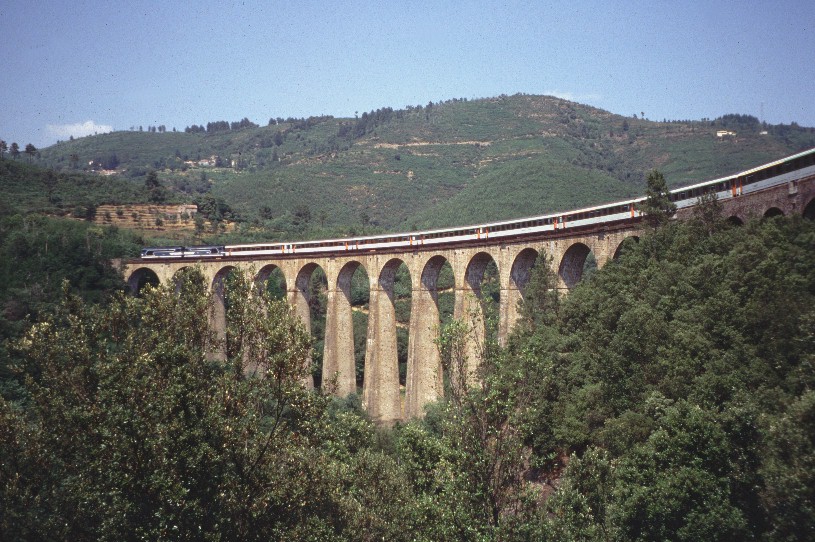 The Clermont-Ferrand-Nîmes section covered by Le Cévenol is a distance of a 303 kilomètres or around 200 miles. The first part of the north-south line is dual directional, from Clermont to Arvant, after which it becomes a single line until its arrival in Alès. The final stretch to Nîmes is two-way. For its entire length, locomotion is ensured by diesel engine.

Whilst this is a working railway, the Cévenol line boasts 106 tunnels and numerous viaducs. Some of these are particularly spectacular, like the viaducts at Chamborigaud and lake Villefort. The highest point of the journey is that of La Bastide Puylaurent, an altitude of 1018 metres, confirming the line’s credentials as a bone-fide mountain railroad.

The journey is a real treasure-chest of spectacular scenery complemented by rare industrial architecture. Southwards from Saint-Georges d’Aurac, located around an hour’s drive from Le Puy-en-Velay, the line follows the bottom of a gorge and some magnificent countryside.

La Bastide-Puylaurent is located at a confluence of historical hiking routes, including the Robert Louis Stevenson Trail and The Regordane/St Giles Way. South of the village, the railway crosses the Atlantic-Mediterranean watershed. The line then descends spectacularly through the eastern flank of the Upper Cévennes Valleys, and over several important viaducts that are real works of industrial art. These viaducts are built on either a slope or a curve. The most notable examples are at Chapeauroux, Villefort and Chamborigaud.

At Villefort, the viaduct crosses the River Altier at a height of 72 metres. Lying at 629 metres above sea level, it is the highest stone viaduct in France and is 257 metres long. The Chamborigaud viaduct depicted above is even longer, at 409 metres. Needless to say, it is hearts-in-mouth time and cameras are ‘de rigeur’. 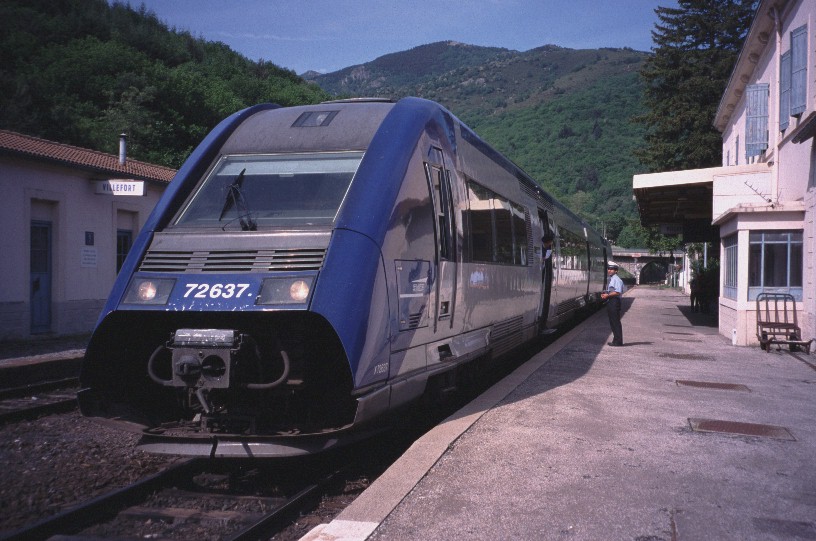 Between La Bastide and Sainte Cécile d’Andorge, passengers go through 42 tunnels, the longest of which, la Bégude, is 1728 metres in length. Way back in 2008, when the writer took his two young daughters on the line for a day trip, the lights would go out upon entering each tunnel – they absolutely loved it and papa was the best tour-guide in France. I am not sure other passengers on board would have agreed, though, as my girls screamed with laughter at every blackout!

After entering the Alèsian Basin, the train follows the course of the River Gardon from Alès through the Garrigues to Nîmes. If you like to get away from the car when walking in France, and enjoy train rides as well as fine walks, then the chance to combine the two by Walking the Cévennes Railway offers you an unforgettable opportunity. We have chosen the nicest circular walks for you to do at intervals along the line, most of which are tailorable to different levels of difficulty and experience – see the links below.

Finally, it is worth noting that the line requires considerable maintenance work, which tends to be carried out in the spring. During such periods, trains are replaced by SNCF buses. So make sure you check the timetable carefully to avoid disappointment, or book one of our trips and let us be your guide!

This short walking tour that utilises the Cévennes railroad:

This one-week tour laces together some circular walks along the Cévennes mountain railway: