alking in Languedoc focuses on the abundance of remarkable hiking, trekking and walking trails in the Languedoc-Roussillon region. If you are looking for ideas for future walking trips in France, but haven’t made your mind up regarding the region, you really need look no further than walking in Languedoc. It is blessed with some of the best and most varied hiking in France, and many trails that can be walked all year round.

Walking in Languedoc can be very similar to walking in Provence in places, particularly where they converge – and just where one ends and the other begins is, of course, a strong bone for contention. Historically speaking, those living to the east of the Cevennes foothills have always considered themselves to be part of western Provence. They tend to ignore central government-imposed regional boundaries that push Nimes and Uzes into Languedoc, when most [including the Michelin guide] naturally place them within Roman Provence or Provence Gard.

Walking the Stevenson Trail in France

While this trail starts to the north of Languedoc, the bulk of the trip takes place within the Languedoc region. It is a top-ten ranked trail that takes you from Le Monastier, near Puy-en-Velay in Haute Loire, to St Jean-du-Gard in The Cevennes, a distance of 156 miles or 252 kilometres. 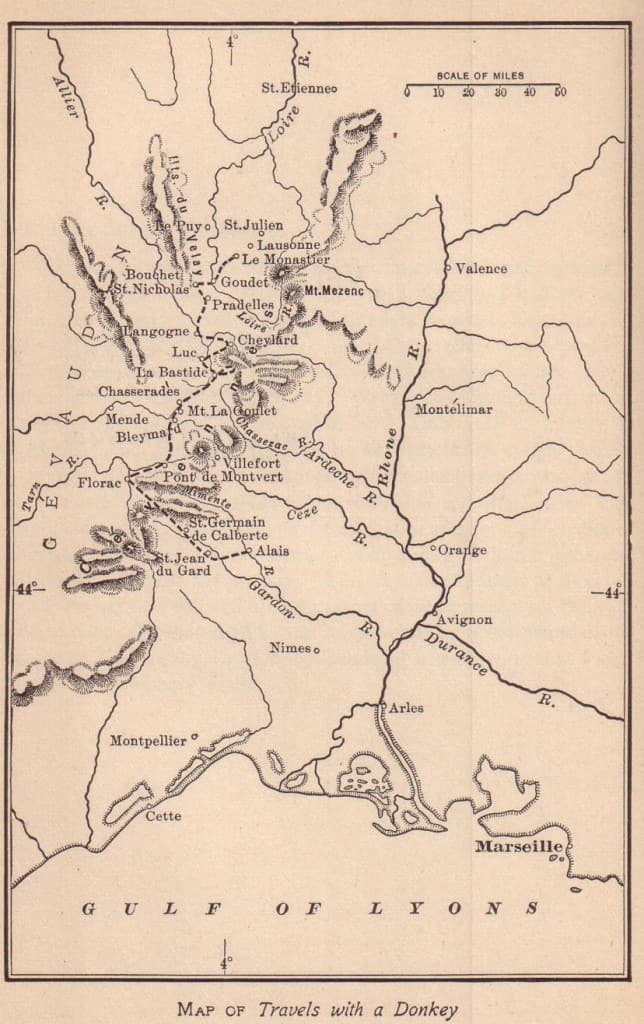 Travels with a Donkey in the Cévennes, first published in 1879, was one of Robert Louis Stevenson’s earliest works. Admired by the likes of John Steinbeck, it is considered a pioneering classic of outdoor literature and one that set the standard for the whole travelogue genre that was to follow by presenting hiking and camping outdoors as a recreational activity. Futhermore, Stevenson’s walking in France can be considered as a catalyst for the whole back to nature and modern hiking sports and social genre.

The Book relates Stevenson’s twelve-day, solo hiking trip through the thinly populated and impoverished areas of south central France and into the Cévennes. He spent a few months planning it from Le Monastier before he departed and, whilst twelve days is perhaps the optimum period for accomplishing this delightful walking holiday in France, the minimum time required is nine.

Stevenson was bedeviled with poor health for much of his life and some argue that this trek hastened his departure from the world; not due to the level of difficulty of the trail itself, but because he developed a penchant for sleeping out rough at night that few others would undertake nowadays. Thankfully the quality of accommodation that can be found along the entire length of the modern Stevenson Trail obviates the necessity to have recourse to a tent.

Stevenson was in his late twenties when he undertook this long-distance trek and the route he took was not of any particular significance prior to his visit. His objectives were simply to visit some of the places in The Cevennes that had become household names during the Uprising of 1702 and, along the way, try to forget his American ‘lost love’.

Walking in Languedoc’s GR70, as it is known nowadays, is done purely for recreational purposes, and in relative comfort, from April to October respectively. For those who enjoy classic inn-to-inn hiking, it is a must.

The St Guilhem Way takes you from the rolling highlands of Aubrac to the coastal lowlands of the Languedoc, a distance of 112 miles in ten days of walking. Between the volcanic Aubrac Plateau and the Mediterranean Garrigues, you get to walk limestone table-tops, deeply-incised canyons, the highest massif in southern Cevennes and the geological miracle that is the Cirque de Navacelles. Oh, and the Grand Finalé of the village of St Guilhem itself is well worth a visit to boot! Thistrail undoubtedly offers some of the best walking in Languedoc 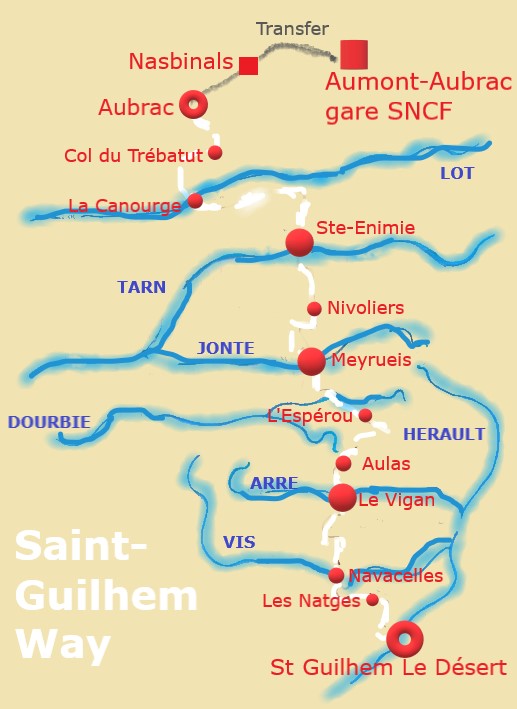 Apart from being simply a great trail to walk, the justifications for doing so are multifarious. Firstly, The St Guilhem Way is an ancient transhumance route. Sheep migration is a phenomenon that is endemic to Cévennes and pre-dates man’s domestication of sheep.

The first tourists were pilgrims and there were several ways to get from Le Puy en Velay to Rome or to Santiago de Compostela. The Via Podiensis being the most important French Camino, two alternatives served some travellers with time on their hands: the Chemin de St Gilles in Eastern Cevennes (aka The Regordane) and The St Guilhem in the west and south. Both allowed pilgrims to visit sacred sites (the Abbeys of St Gilles and St Gellone – now Saint-Guilhem-le-Désert – respectively) before either opting to head east to Rome or west to Compostela along the Arles Route.

From the 11th century, when the climate naturally warmed up and sedentary populations started travelling to trade, the Saint-Guilhem trail assured communication between the coastal plains and the important market towns of Le Vigan (silk) and Meyrueis (hats).

Finally, The Chemin de St Guilhem is rich in human and natural heritage. You will discover burons – small, partially-submerged granite houses used for ripening cheeses; prehistoric megaliths in the form of dolmen, menhir and cromlech; crosses made of wood, stone or metal, attesting to the importance of Christianity; and UNESCO World Heritage, such as the Grands Causses, the Cirque de Navacelles as well as remarkable and protected flora and fauna.

For concise details on walking Saint-Guilhem Way for yourself, see: 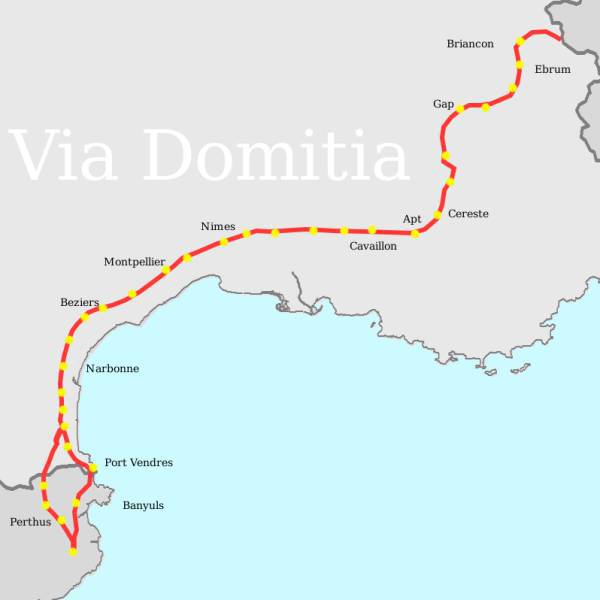 Walking in Languedoc on long distance pathways can obviously take you across departments, but also lead you into other regions and even across national boundaries. The Celts preceded the Romans in Languedoc-Roussillon. Having arrived from Northern Europe, they settled and rarely travelled, and brought in their provisions by sea. In contrast, for reasons of Empire construction and maintenance, The Romans were much travelled and constructed fine and straight roads or ‘vias’.

The most important of such roads in France, The Via Domitia, joined Rome with Spain and traversed the south coastal strip of France, through Provence and into Languedoc, along what is now called ‘La Languedocienne.’ It was constructed by Emperor Dominus Eanobarbus in 118 BC.

A good part of the route still remains as it traverses The Region from Beaucaire in The Gard to Spain. Those interested in walking sections of it as part of a tour when in walking in Languedoc should contact us for further details. For example, our Hiking Camargue tour follows the route on its second day. Once it reaches the Pyrénées, it splits into two paths: the Eastern Route follows the coast down to Portus Vénéris (Port-Vendres) whilst the alternative path goes via Perthus Pass in French Catalonia, crossing Cerdagne by la Via Confluentana. Most of this is now covered by the RN116.

Throughout the route, The Romans placed monoliths of around 2 metres in height called ‘borne Milliaires’ at a distance of one mile from each other. They were engraved with the name of The Roman Emperor. The first of these monoliths can be found 2 kms west of Beaucaire. The UK has of course kept faith with such an ancient measurement. Just like today, there were locations en route that served as staging posts and watering holes. Perhaps the most noteworthy along the route is the town of Salses. The surface of the Via Domitia was not paved or cobbled, except for the parts inside towns or at major crossroads.

The Régordane or St Giles Way 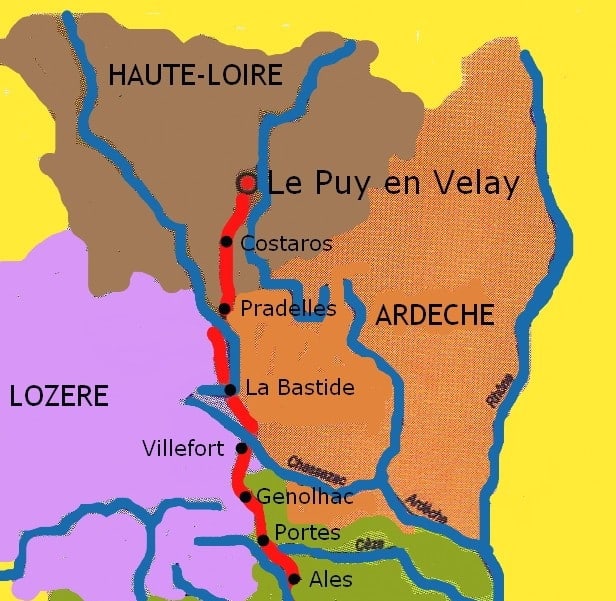 Those walking in Languedoc will be interested to learn about France’s most influential trail, forgotten in the modern era but recently reborn. The Régordane is the cultural jewel in the Languedoc hiking crown – a path that awaits its placement in the Pantheon of French walking tours. The Régordane’s history goes back to classical antiquity, but its origins are thought not to be Romanesque, but Gaulist. It is the southern section of the route that links Paris to Nimes and beyond, and the part referred to as Le Chemin de Régordane is strictly speaking the section linking Luc in the department of Lozere to Alès in Le Gard.

Régordane saw its halcyon days from the twelfth century onwards, when goods travelled along its course from the Mediterranean ports like Montpellier, Aigue-Mortes and Saint-Gilles to Parisian tables. An important pilgrimage route, linking to the Chemin de Saint Jacques (see below), its upkeep suffered with the lack of Church funds following the Albigensian Crusade. When Gaul spread eastwards, The Rhone Valley took precedence and, whilst it had something of a second wind at the time of the industrial revolution, it was short lived once railroads became the preferred means of shifting bulk resources.

The route shares the same natural fault-line as the more recent Chemin de Fer, whilst a good deal of the original trail has been tarmacked. Nevertheless, the modern variant rarely follows the main road, but instead relies on a mix of countryside trail and single-track road.

All those walking in Languedoc should actively support this gem of French heritage, the preservation of which remains a future battlefield. The Régordane offers various options for hiking depending upon your interests. You can hike the extended Le Puy – St Gilles trail (the St Giles Way) comfortably in two weeks; while the shorter ‘Regordane’ will take you about half the time. For those who enjoy historical ramblings through myriad villages and character hamlets, walking in Languedoc along The Régordane is hard to beat.

The French ‘Ways of St James’ (Spanish: Camino Francés) are the most popular routes of the pilgrimage to Santiago de Compostela in Spain. Besides the most important variant, the Via Podiensis or Le Puy Route, sections of which have been ranked for some time in the top ten of walking tours in France, the Languedoc or Arles route originates in Provence. It is an extension of the route from Italy, the Via Tolosana, and becomes the Arles Way or La voie d’Arles (Chemin d’Arles) in southern France. After Arles, it passes through Montpellier, Toulouse and Oloron-Sainte-Marie before reaching the Spanish border at Col du Somport in the high Pyrenees. There it connects to the Aragonese Way. 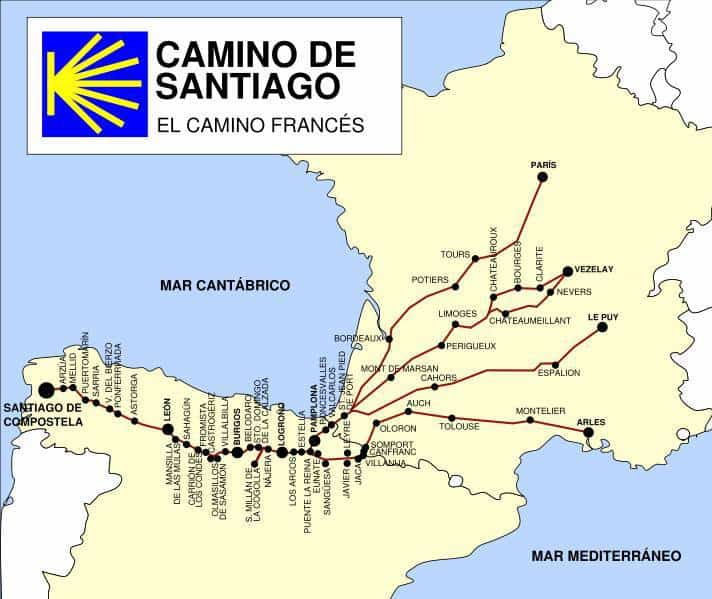 To see our full range of walking holidays in France, visit self-guided walking tours in France