Walking in Uzège and Uzès

Walking in Uzège and Uzès

Walking in Uzège and Uzès is an opportunity to enjoy Le Midi at its best. Uzès is a town of some 18,000 people lying to the north of Nimes. Historically, it was seen as the capital of Uzège, one of the largest ‘regions’ in the Languedoc. Its roots go back to Gallo-Roman times, when it was known as Ucetia and an oppidum was constructed.

In 50 AD, the Romans decided to tap the source of the Eure to provide water for the city of Nîmes. They built a 50-kilometre-long aqueduct from Uzès to Nimes, parts of which still remain. They can be visited during one of our walking holidays in France: see Pont du Gard walking.

Uzès was a Bishopric from the fifth century until the French Revolution. The Bishops were very powerful and even had the right to mint coins. The town possessed powerful lords from as early as the 11th century. Their loyalty to the Crown resulted in their being made viscounts, counts and dukes.

After the Wars of Religion, Uzès was made the First Duchy of France. In other words, the Duke of Uzès was first in line for the French throne after the royal family itself. Twenty-one Dukes of Uzès were killed or wounded in battle fighting for King and Country. The Duke of Uzès still owns the castle in the town centre, which has been the family residence for more than 1000 years.

Like so much of the department of The Gard, Uzès became Calvinist. The ideas from the Reformation came south, either down the Rhone Valley or along the legendary Regordane Way. A Huguenot stronghold, it was the fifth largest Protestant town in France at the time of The Religious Wars.

Along with so many of the region’s towns, it saw the destruction of all of its churches and temples. Roland Laporte, one of the key players in the the ‘Camisard War,’ was betrayed and shot in Uzès after a tip off in August 1704. .

To learn more about this rebellion, read our article on The Protestant Uprising in Cevennes. And why not join a themed hike to explore further its history, such as Hillwalking in Cevennes.

There is much to be learned from walking in Uzège and Uzès via themed historical rambling. The hinterland of the Eure valley and the Gorge d’Alzon are a delight to hike, affording spectacular views of the town and its surrounding countryside. 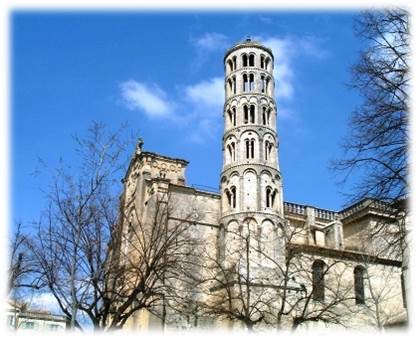 From the French Revolution until the Industrial Revolution, the town thrived on its textile industry. Woollen cloth, stockings and silk were all produced and 2000 of its townsfolk thus employed. The disease that hit the region’s mulberry trees was the death knell of Uzès’ prosperity.

As was the case with Languedoc as a whole, the advent of the railroad found the region’s competitivity sadly lacking. The influx of cheaper goods from the North took its toll.

The building of the railway station outside the town only served to reinforce the problem, and Uzès’ isolation. Nevertheless, its lack of economic development means that it has preserved much of its medieval charm in contrast to some other important towns nearby, such as Alès.

The Region and Villages of Uzège

Uzège, designated a part of the diocese of Uzès, comprised 193 parishes prior to 1789, corresponding to the north-east third of today’s department of the Gard.

For ardent walker or inveterate rambler, the villages of Uzege, like Valcezard to the north, offer an abundance of historical interest. They make for a fine interlude during a morning or a day’s hiking. Hilltop villages with their “castellas” and outdoor washrooms; and all surrounded by fields of vine and lavender. Without a doubt, walking in Uzège and Uzès is one of the finest areas in Provence for all-year-round walking.

To the north west of Uzès, just east of Lussan, lies the Concluses gorge. Nearby is the tallest menhir in Languedoc, the “menhir de la pierre plantée” standing 5.60 metres in height.

The highest point when walking in Uzège and Uzès is Mont Bouquet. Located west of Lussan, it is a limestone promontory measuring ten kilometers. Its highest point, known as ‘le guidon du Bouquet, has an altitude of 629 metres. The panoramic view that it affords over the whole of the garrigue is spectacular.

As well as The Cévennes and Mont Aigoual, on a clear day one is blessed with views as far as Mont Ventoux – not to mention the Alpes and Pic St Loup near the Mediterranean. Stashed away behind Mont Bouquet one finds the picturesque village of Bouquet, the charming hamlet de Suzon and the ruins of Le château d’Allègre.

Finally, tucked away in the bottom right hand corner of the region is the celebrated ‘Pont du Gard’. The second-most visited attraction in France, it straddles the Gorge de Gardon. For those who know the area well, some of the trails are fabulous and offer the opportunity to enjoy the Roman aqueduct as very few get to see it.