Hiking in France by Train

Hiking in France by Train

iking in France by Train is a concept The Enlightened Traveller is proud to have launched. Moreover, to play an active role in Cevennes’ economic viability, via an eco-friendly tour featuring hikes laced together by short train-rides, is testimony to its originality.


Hiking in France by Train offers a truly unique experience. Let’s extol the virtues of these rail-hike trips through the reflections of one of our enlightened hikers.

Hiking in France by Train was an exciting thought for someone who is very self-critical about his carbon footprint. The Cevenol is a fascinating journey on the ‘line of 100 tunnels’ that cuts through France’s Central Massif from Lower Languedoc to Clermont-Ferrand and beyond. A camera is de rigeur, but don’t lean out the windows en route. 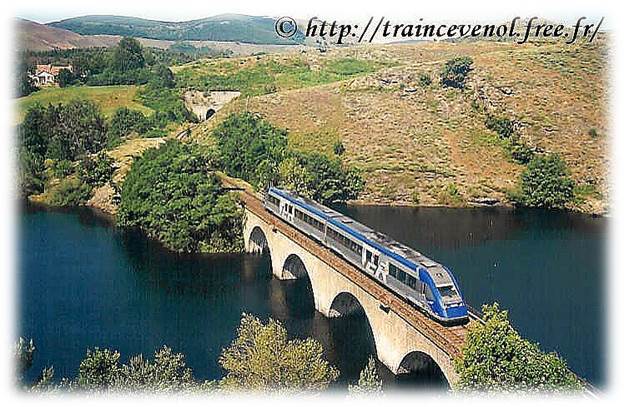 Starting in Langogne in north-eastern Lozere, the first circular walk is expertly crafted, with a climb in the morning, little elevation variation after lunch and a nice gentle incline back to the hotel late afternoon – and that after a fabulous ramble around the granite and medieval cité of Pradelles.

What I particularly enjoyed on this day’s hiking was the chance to walk a section of the original medieval Regordane Way that has been ignored by those responsible for developing the GR700 of the same name. This is a real shame and demonstrates that the GR700 project is all to do with tourism and little about the preservation of an important part of French heritage.

The highest point of your journey is at La Bastide, an altitude of 3339 feet, confirming the line’s status as France’s last remaining working mountain railroad. La Bastide is where the line crosses the watershed between The Atlantic and The Mediterranean. It is a junction of historical standing, where The Cevenol meets the medieval Regordane and the ever more popular Stevenson Trail.

I really enjoyed the 300-metre climb to Moure des Estombes via the Stevenson Trail – the yellow thickets of brum make for such a wonderful sight and I was fortunate enough to catch a glimpse of a couple of deer that crossed my trail at breakneck speed.

The next day took me into Ardeche via the fascinating Notre Dame de Neige Abbey, celebrated for its liquor. One of only two such Trappist/Cistern (silent) monasteries in France, RL Stevenson stayed there for a few of nights whilst trekking the Cevennes in 1879. They didn’t succeed in converting him to their faith, but I was certainly sold on their red wine.

Back on the Cevenol the next morning, the view across Lake Villefort was something special before you disappear into another tunnel in anticipation of one of those heart-in-the mouth experiences across the Altier Viaduct – lying at 630 metres above sea level, this 257-metre viaduct crosses the River Altier at a height of 72 metres, the highest stone viaduct in France.

Feet back upon terra firma, I enjoyed the hike around the lake and remembered the stories of how it was created at the expense of the village of Bayard, the ruins of which lay submerged below the dam.

Castanet castle was fascinating and I was pleased to see that its restoration following the recent internal fire had done nothing to alter its outward appearance as one of Le Midi’s cutest private castles. And the view from the other side of the Altier is magnificent.

Just down from Genolhac, on the way back to Ales, the stunning 410-metre long Chamborigaud viaduct is a suitable grand finale to what must be one of the most eco-friendly and memorable walking holidays in France today.”

Hiking in France by Train in Cevennes is great fun and exclusively designed by The Enlightened Traveller. The trip comes in two formats: a four-night version called France on Foot and by Rail as well as the full 7-night tour, Walking Cevennes by Rail. Both are available from April to late October, with easy access via Nimes. They can be personalised to suit various levels of effort of challenge, from light to moderate and beyond.